Water: Nature’s Wonderdrug–Now with Wonderdrugs! (cartoon) — Reposted from Wend Magazine, Twilight Earth, PlanetSave, and Ecopolitology.
Between 2006 and 2007, the Southern Nevada Water Authority in Las Vegas screened tap water from 19 US water utilities for 51 different compounds. The 11 most frequently detected compounds are highlighted in the cartoon and described below. 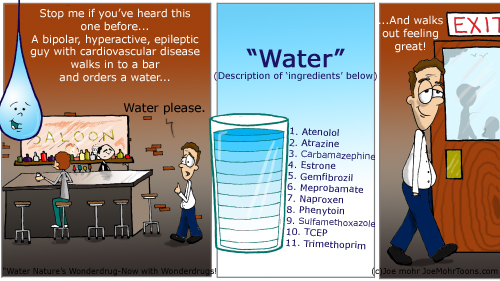 1.used to treat cardiovascular disease, 2.an herbicide banned in the European Union (still used in the US) has been implicated in the decline of fish stocks and in changes in animal behavior, 3.a mood-stabilizing drug used to treat bipolar disorder, 4.an estrogen hormone blamed for causing gender-bending changes in fish, 5.an anti-cholesterol drug, 6.a tranquilizer used in psychiatric treatment, 7.a painkiller and anti-inflammatory linked to increases in asthma incidence, 8.an anticonvulsant used to treat epilepsy, 9.an antibiotic used against the “Strep” bacteria, 10.a reducing agent used in molecular biology, 11.an antibiotic

Christian Daughton of the EPA’s National Exposure Research Laboratory says that neither this nor other recent water assessments give cause for health concern. “But several point to the potential for risk – especially for the fetus and those with severely compromised health.”

Top 11 compounds in US drinking water
Drink Your Pee!: The Future of Water Filtration
Top Colleges Working Together to Solve Nation’s Water Woes